← more from
Mansions and Millions 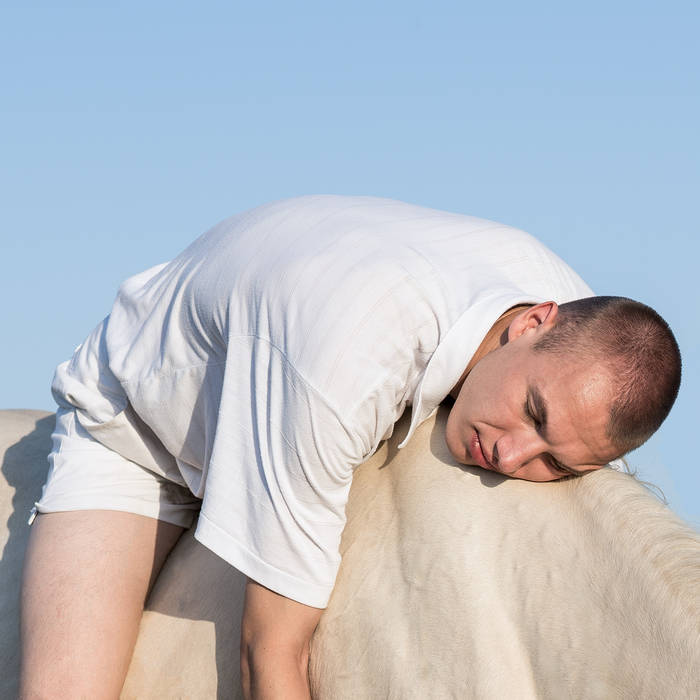 Nikita von Tiraspol The lyrics are between strange, melancholic, freaky and weird and beautiful. If you do not understand German the beats and rhythms and melodies are great to listen to too. Favorite track: Rotmilan.

"Who is this guy? Who is this insane fucking guy? A guy who produced Trap tracks on his last EP and is now paying homage to Neue Deutsche Welle, as if he has never done anything else before and in a way that we never want to hear anything else ever again? To whom the crowds are devoted to in Paris, a guy who sleeps naked in the woods in the middle of Germany, who sings of the shimmering girls („Schimmerndes Mädchen") and who doesn’t only embrace sadness but takes it to the club and goes wild with it?

I am telling you: It’s the guy who we desperately need right now: He is making music for, as he is putting it „young hipsters with Apple AirPods who wear big white sneakers but also for the 40 year old Goths who are still listening to El Deux“. He is making music for you, you and for you, too. He makes music for German Schlager fans, for the raver descending into the endless night and for next Sunday afternoon’s come down.

Luis Ake is the guy, and he is from Stuttgart of all places, where Germany basically invented its Germanness. And he is releasing this album that's as cold as the winter in which he recorded it. Of course „Bitte Lass Mich Frei“ was born in winter, in a backyard without heating – how could it be any different? Who needs heating when your heart is broken, shattered even? Yes, the album was written after a breakup. Obviously it was. And so it describes all forms of that special kind of insanity that comes with a broken heart: Loneliness, shallow sex, blame, longing, all of that, and more.

„Bitte Lass Mich Frei, ich bin so allein“ (Please let me go, I am lonely), a phrase from the title track, is not just an accusation, it’s also Ake's central promise. It doesn’t even matter whether this break up was real or not. It’s the feeling that counts. „I’m only making music when I’m sad“, he says „I put the sorrow in the music and preserve it this way“. The endless quest for happiness. We all know how it is. And that’s why Luis Ake captures our hearts and minds: He doesn’t hide anything. In songs like Zimmer ohne Tür, Zurück or the title song Bitte Lass Mich Frei he is indulging in that kind of mental striptease down to the bare bones which we ourselves would never dare to.

„A strong emotion can write an arragement practically by itself and it constitutes the core of a song“, Luis Ake says. „A lot of times the basics of a song are made within 20 minutes“ He is writing his songs without a computer, only with a sequencer, a few synthesizers and here and there you will hear a real saxophone or a guitar. Equipment he has collected over the years, using it all to record everything by himself. The results are reduced arrangements in which he chases his own voice up and down, from the lowest of lows to the highest of highs like on „Rotmilan“ or the single „Schillerndes Mädchen“, a beauty of a pop song, which after two minutes of falsetto tips over into a Grauzone-like hypnotic exorcism. But kinda sexy, somehow.

Let’s be clear: What Luis Ake is delivering here is an overdue update of Neue Deutsche Welle, paired with the fundamental sparseness of Russian New Wave bands such as Motorama or the synth pop project лето в городе, sprinkled with a little bit of Detroit in Effect-inspired club attitude and a pretty vast understanding of big emotional pop gestures, somewhere between depressed, unsuccessful German Schlager singers and Neil Young.

„Everything is just average, nothing is really simply good“, Luis Ake says when he describes his view on life in general, not quite serious, not quite jokingly. After hearing this album, we might want to add: Not all is lost, Luis. You are not.“

With a voice in between bass and falsetto, Luis Ake sings about love, loss and life without shying away from pathos or vulnerability.

Bandcamp Daily  your guide to the world of Bandcamp